Why Marine Renewable Energy in our ocean? 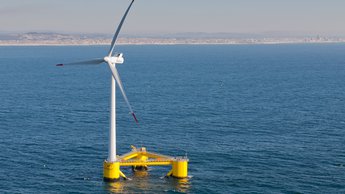 Clean energy is an important priority on the West Coast, as reflected in the renewable energy targets of our states.

Offshore wind turbines are similar to the turbines you see on land, but are able to take advantage of the stronger, more consistent winds of the ocean. Wave energy devices come in a wide variety and use ocean movement to generate electricity.

The prospect of MRE development is a relatively new consideration on the West Coast. Planning for MRE will require developers, regulators, and stakeholders to consider a tremendous amount of information about the ocean and how we use it, and to understand the context of proposed development areas.

The West Coast Ocean Data Portal (WCODP) is a gateway for physical, biological, and human use data from providers across the region. The WCODP and its network of data providers and users will provide crucial resources for MRE planning. 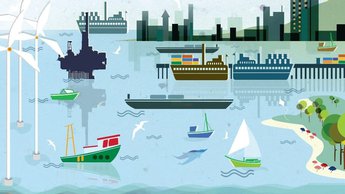 The Pacific Ocean is an ecologically rich and busy place. So where is a new industry to go? That is a complicated question that MRE developers, ocean managers, and ocean stakeholders must answer as we collectively consider new ways to use the ocean.

The planning, siting, and management of MRE installations depend on our knowledge of the ocean, including its natural resources and wide spectrum of human uses. Even knowing what we don’t know--where there are data gaps--can be helpful. For example, knowledge of data gaps can help marine managers plan survey and monitoring efforts.

Generally, the first step is to examine where the winds and waves are suitable for energy development.

West Coast Winds: How Windy is it Here?

Wind blows harder, and more consistently, over the ocean than over the land. Because of this phenomenon, offshore wind can be an important component of the mixed energy portfolios to help West Coast states meet their renewable energy goals.

Wind is measured in meters per second (m/s), and anything faster than 7 m/s is considered sufficient to power offshore wind turbines.

The National Renewable Energy Laboratory estimates that our portion of the Pacific Ocean has the potential to generate about 769 terawatt hours of offshore wind energy per year (source: NREL). To put this into context, that is roughly double the the net electricity generation in all three states in 2014 (source: EIA).

While the wind here is excellent, the Pacific Ocean offers a unique challenge for offshore wind development. The water gets very deep very quickly, and so offshore wind turbines would need to be on anchored floating foundations rather than fixed-bottom foundations. Floating foundations are a newer technology. Though several demonstration floating wind systems have been successful around the world, there are no utility-scale floating offshore wind farms installed to date.

West Coast Waves: Energy from the Motion of the Ocean?

Where there are good winds, there are good waves. Our West Coast waves are not only excellent for surfing, they are also a potential source of power. The marine hydrokinetic (MHK) industry has developed devices that produce electricity from the movement of the waves.

As you might expect, big waves that are close together have more energy than small waves that are far apart. This energy can be represented by Wave Power Density, expressed in kilowatts per meter of wave crest (kw/m).

As early as the 1870s, innovators in California were developing wave energy devices (Source: outsidelands.org). Since those early days of MHK invention, a fascinating variety of wave energy technologies have been pioneered. However, the modern MHK industry is still in a testing stage with no large-scale commercial projects planned just yet. 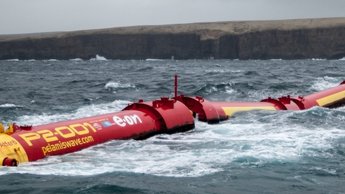